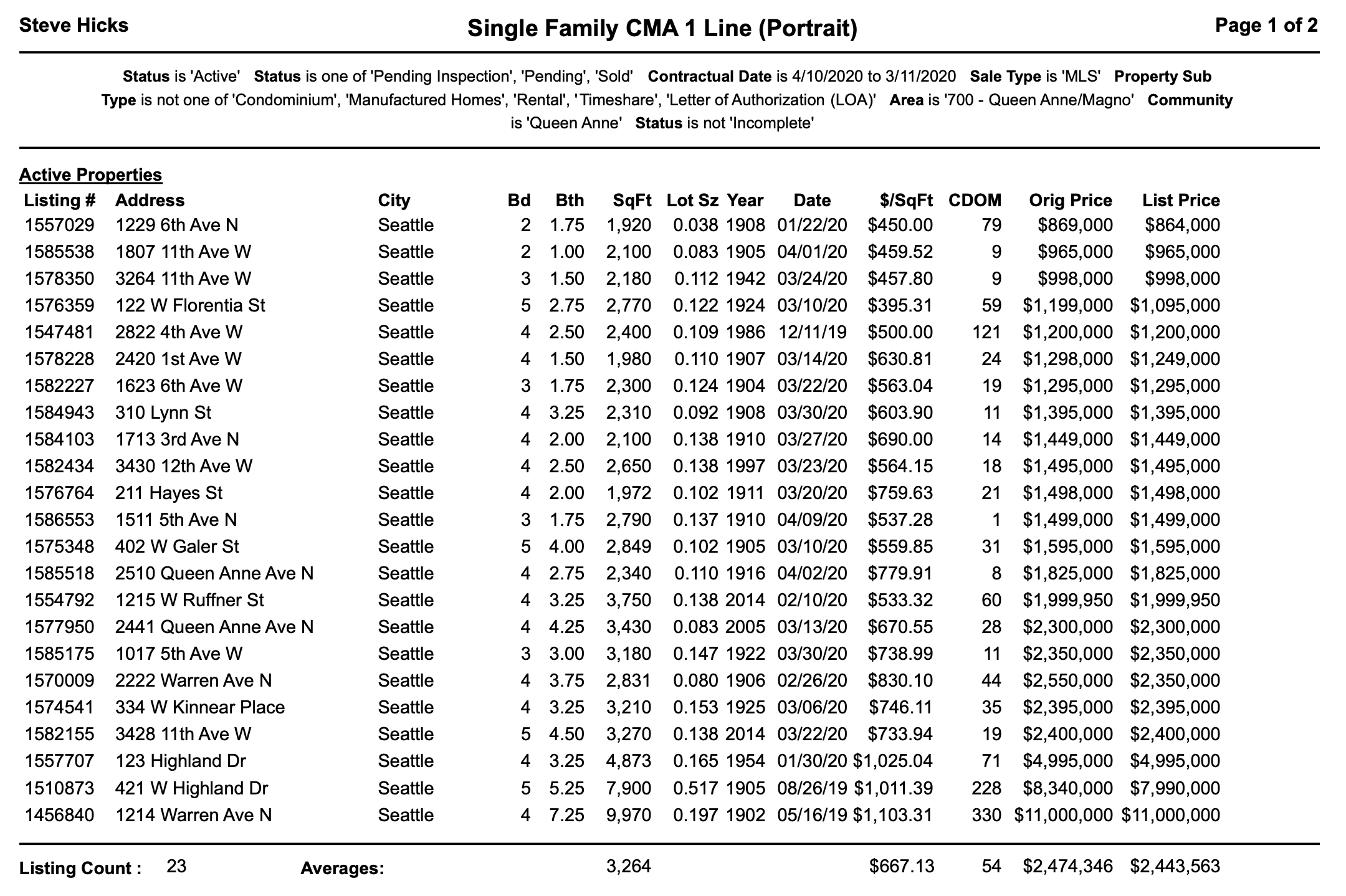 Strange times. As I stated in last month’s newsletter, the real estate market was showing earlier than normal signs of a coming spring market that was going to be gangbusters. That was true until March 25 when non-essential services were ordered to stay at home. As a small personal example, I sold a home in Magnolia on March 12 that was listed for $975K. There were nine offers on it with nine pre-inspections. My clients and I were very fortunate to have been the winner at a sold price of $1.205M. We were also very lucky that we were able to fast track the closing to March 27th because since then, several lenders, led by Wells Fargo, have temporarily suspended granting “jumbo” loans(loans over $741K that are not government secured). These larger loans, if available, face tightening qualifications for buyers. Until that restriction is lifted, it is going to have a negative effect on Queen Anne listings since nearly all of the homes on the Hill are well over $1M. Out of curiosity, I just searched SFD on QA that have sold since being listed after March 24.There were two. Normally by now, we would be in a very active spring market with homes up to $1.5M flying off the shelves and being driven up in price. As an  example, of the 15 homes that have sold in the last 30 days since my last report, 8 have sold for more than list, but these all went into contract before March 25th. Incidentally, the winner in that group for this month was 3603 13thWest, listed for $1.295M and sold for $1.615M! Until the restrictions, the average sold price/square foot was steadily rising and reached $575.00.

My prediction for where the market will be, once we have people going back to work, is that the pent up demand for QA homes will be very strong and when we get listings coming on the market(that I suspect are currently being held off the market) we will have a gangbusters market once again. My best guess is that will start to happen in mid-June. I don’t see our economy getting back to strength until October or so. Because of low interest rates continuing as well as low inventory, I do not see prices coming down. I do see only vacant homes come onto the market until the all-clear is issued since most sellers will not want strangers in their home if they are still  living there. Actually , for the past year, about 65% of the homes coming on market have been vacant anyway(my observation looking at the data over the last year).

QA Pendings and Solds for April 2020 Report the active and sold data for the preceding 30 days as usual and have added a link to Bill Gates discussing the pandemic and what he sees needs to happen before we are in the clear.

Related Articles
Market News Your Queen Anne Market Report for June 2020 We’re almost back from the lag in activity that occurred in April. Prices are resuming their upward rise. Demand is very high and the Fed just declared that interest rates will remain low through 2022. To do that, the Fed is buying enormous amounts of Treasury bonds and mortgage -backed securities, among other things, to […]
Real Estate News A Guide to Mortgage Assistance During COVID-19 Image Source: Shutterstock   For some homeowners who have been financially impacted by the COVID-19 pandemic, there is a high level of concern about paying their mortgage. Fortunately, there are options to aid struggling homeowners from governments, financial institutions, and loan providers. The following information is intended to provide clarity on which financial relief options are […]
Real Estate News SEATTLE POISED FOR FASTER RECOVERY THAN MANY OTHER CITIES It may feel like a tired refrain after nearly two months of quarantine, but it remains true: it’s still too early to truly tell the toll COVID-19 will take on our economy — both locally and nationally — until we are able to fully reopen and jumpstart  area businesses. Thanks to our diversified economy, strong […]